Well, it's been a long old wait, but our brand new website has finally landed!

First and foremost, I'd like to once again give a massive thanks to everyone who donated to the crowdfunding campaign to make it happen. You know who you are and I shall be eternally grateful to each and every one of you. I do hope you like what has been created.

It has been a long process though. Much longer than I'd anticipated. In fact before the reigns were handed over to the team at iCandy Design to come up with the new site for us, I knew the business really needed it back in 2017 after having completed my first season with the nursery.

As many of you will know, I took the business on from the previous owner in 2016 and for the first two and a half years of owning it, I continued to work my part time job as a garden manager for the National Trust three days a week, at the 17th century farmhouse called Moseley Old Hall.

By the time 2018 came and we were getting much busier, I had asked Pete - who was our Canada-based webmaster at the time - to rewrite the website. He got started on it but as he also had a 'day job', his time available to work on the redevelopment of the site was very limited and a year later, very little had happened. I had given him some more time as my budget was extremely tight, but unfortunately Pete suffered some ill health and coupled with his lack of time, six more months went by and still we were nowhere.

He advised me to look elsewhere as I think he knew deep down he was unable to commit to finishing the project. So, I started to get quotes, but I soon started to realise how much it was going to cost! With a website, it's not just the design that matters, it's all the coding in the background that enables the functionality. And to quote Pete, the old website was written in "ancient custom code", unfathomable to anyone but him, unless you perhaps spent countless hours trying to make sense of it all. So, it needed starting from scratch.

Pete only did the development side too, which meant that any detailed changes to the design would have to be outsourced. Really, I wanted to find an agency that could do it all!

After much research, I was most impressed with the service and information provided by iCandy, and another primary reason I wanted to choose them, was that they have produced websites for other horticultural nurseries, so they would clearly also have an understanding of what's important when selling plants online.

The next problem though, was budget! Mine was pretty much non existent, and so that's when, in 2020, I decided to launch the crowdfunding campaign to try and enable the upgrade of our online shop. I was simply bowled over at the incredible support we received and as I say, will be eternally grateful to all who donated. If you still have an outstanding discount to use against a future purchase, please feel free to get in touch at any point in the future to redeem it.

Work started on this new site in October 2020 so we're around about 12 months to completion. There may still be some tweaks that we'll make and I'm sure the site will gradually evolve. We'd be grateful for any feedback too, so feel free to use the contact form and let us know your thoughts.

There'll be more exciting products coming soon too, so watch this space and as ever... 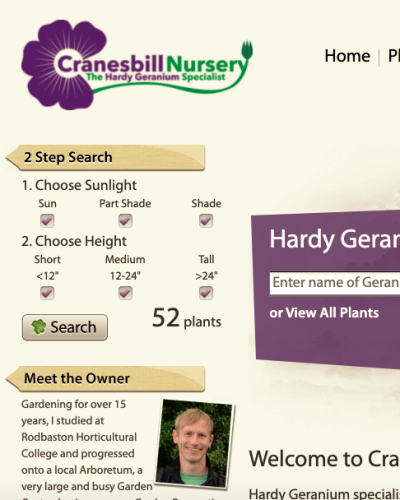 Well, it's been a long old wait, but our brand new website has finally landed!

Enter your name and email address to receive your copy of our 'Hardy Gernium Growers Guide' absolutely free!