Key Features: This is not a lettuce. Little Gem is essentially a smaller version of 'Russell Prichard'. Russell can take up a fair bit of space, so if you like that plant but only have a small Garden, Little Gem may be your solution. Its bright cerise flowers are held tightly over a neat, compact mound of grey-green foliage.

There aren’t many varieties of x riversleaianum in comparison to other types of Geranium, and only really two main ones, in the form of ‘Russell Prichard’ and ‘Mavis Simpson’. The former, I would think can almost certainly be seen from space, with its ultra-bright magenta flowers. If you want to draw the eye to a particular part of the garden, then Russell’s your guy. His sister Mavis, however, is far more subtle with flowers of a very soft pink. Both have the same, very attractive, grey-green foliage and although the stems have a creeping nature (but not invasive) the plant generally forms a neat mound. There is also a sort of smaller version of ‘Russell Prichard’ called ‘Little Gem’, and no, I’m not mistaking it for the lettuce. The x riversleaianums are a cross between G. endressii and G. traversii, the latter not really being commercially available. They should be grown in a sunny, well-drained position. It should be noted that they do not tolerate sitting in cold, wet, winter soil very well, so it is wise to either cover them in some ventilated way, or plant them in gently sloping ground if it is not sufficiently well drained. 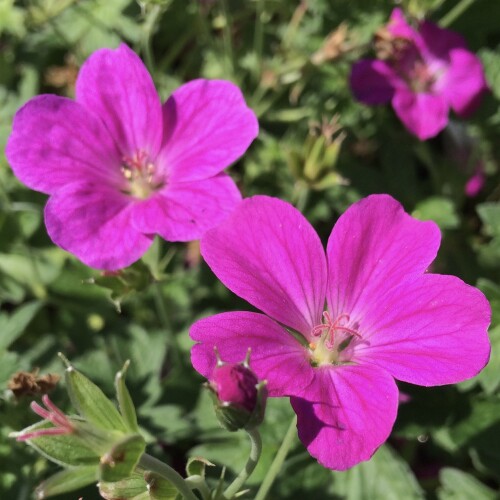